The Famoso Raceway dragstrip is located north of Bakersfield, California, and is known historically as the home to the annual March Meet, also known as the U.S. Fuel and Gas Championships. The strip, located on Famoso Road between Highway 99 and Highway 65 east of the Highway 99 and Highway 46 interchange, was originally built in World War II as an auxiliary training base for the nearby Army Air Corps training base at Shafter’s Minter Field. After World War II, the Army abandoned the field. It was in the 1950s that an aspiring group of drag racing pioneers from the Bakersfield area, the Bakersfield Smokers, purchased the strip and made the necessary adjustments to allow for drag racing. The Famoso Raceway hosted the first ever March Meet in 1959 and it helped establish the National Hot Rod Association’s (NHRA) legitimacy.

In 1959 The Smokers offered to pay Garlits to come and race the California boys. That was the birth of the first United States Fuel and Gas Championships. Although the meet received very little publicity, except for word of mouth, it drew thousands of spectators and hundreds of competitors. Although Garlits did not win that race (Art Chrisman in the Hustler did) he went on to win two others that same month and returned to Florida letting the California boys understand that he was for real.

The Smokers ran the U.S. Fuel and Gas Championships until 1965, when they disbanded and sold their name Smokers, Inc. to an eastern promoter named Gil Kohn. In 1969 Kohn moved the U.S. Fuel and Gas Championships to Long Island New York and the event in Bakersfield became officially know at the March Meet. From 1967 until 1988 the March Meet was run under the direction of various individuals including Ernie Hashim, Milton Weller, Jack Williams and Marvin Miller.

The famous Bakersfield  Fuel & Gas Championship meet in March of 1968. Recreated from the original, located at the Don Garlits Museum in Ocala, FL. Likely one of the only few left in existence. 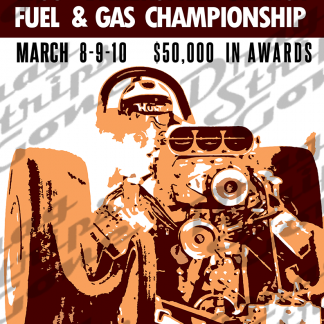