The gasser era was soon to be on the trailer as the new burgeoning funny cars were about to be unleashed. In 1969, Chuck Finders of Cleveland, OH teamed up with another Cleveland-based gasser team, the Hill Brothers, and together, they decided to have one more go at bringing the fans those wild and crazy coupes… but with a twist. A foursome was developed to become a 4 car Nitro Gasser show to tour the country one last time. Finders would run his blown, chopped Anglia, known as”Fire Brewed”, Tom Prock from Detroit would field the Prock & Howell 33′ Willys called “F-Troop”, Jim “Fireball” Shores from the famed, Shores & Hess gasser, was in another Fuel Anglia, while the Hill Brothers had their Willys Coupe. The 4 car show booked themselves under the “Outlaw Gasser” name during the summer of 1969.

This poster advertises the group at Dover on the same day as Woodstock. Only about 80 miles away at Hippy Heaven, it was thunder, lighting, and wind, from 10AM to 1:30 in the afternoon. You can see it in the Woodstock film when the announcer says, “Hold on to your neighbor”, just after Jefferson Airplane played for roughly an hour before the storm hit.

Meanwhile, back at Dover, the sun was shining and the fuel coupes ran to a packed house.

AND YES, THE ORIGINAL POSTER DESIGNER SPELLED “COUPS” WRONG. WE KNOW, WE KNOW! 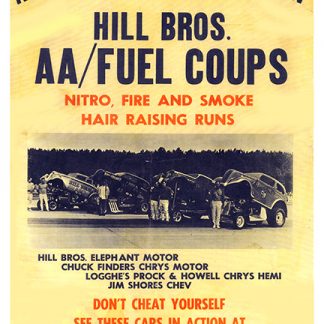