“In the late 60’s & early 70’s not many ladies were out on the tracks, and those who were dealt with some bias. For Della Woods of Michigan ,her first machismo moment came at a track , when she was pulled from the race after the NHRA revoked her license for being a female driver. So she called them up and said Paula Murphy had a license, and  said if you pull my license you better pull hers. They didn’t pull her license but sent me a letter and said I could run again. The “Bernella” name on the car was her brother Bernie and her name combined. Paula Murphy was known as “Miss STP” with backing of Andy Granitelli whose Indy car she drove .The first Female licensed Funny Car driver. She also drove Walt Arfons’ Avenger jet dragster to a female land-speed record of 226.37 mph at Bonneville. So Dover Drag Strip decided to get these two together in 1970 .This poster is reproduced from an actual original we just received, rescued after 50 years. 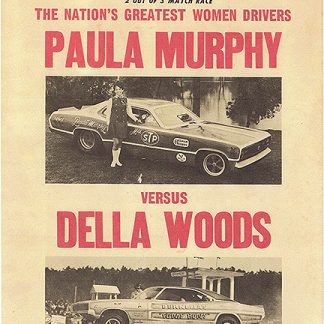 You're viewing: Paula Murphy VS. Della Woods At Dover Poster $7.95
Add to cart