Universally regarded as the world’s honeymoon capital, Niagara Falls also accommodates equally passionate love stories of an automotive bent, such as the love of a concerned father for his hot rodding son.

The Niagara region was still rural country in the 1950’s, with plenty of room to dream in. Local farmer Taylor Johnson may have been the most ambitious dreamer in the country. Johnson owned 197 acres on two parcels of land at the northern edge of Niagara Falls Airport, on Tuscarora Road. He envisioned a 4,000 foot drag strip running through the pastoral beauty to appease the antsy crowds at Jerry Hamam’s race car fabrication shop on Lockport Road. The street races there were becoming all too common for anyone’s comfort, and Jonson didn’t want his son Dean to become on of those unlawful contestants, or worse, a statistic. Luckily for everyone concerned, Taylor Johnson was even more of a doer than a dreamer.

Johnson (now partnered with Jerry Hamam), cleared the future drag strip area with his Ford 9N tractor and contracted a cat skinner (bulldozer operator) to level the topsoil, just before a heavy, wet front settled in for days, then weeks. The saturated soil delayed paving for several more weeks, but Niagara Falls Airport Drag Strip opened immediately after its final paving on June, 18 1961. The crumbling starting-line surface (caused by moisture wicking) was soon cured by sprinkling concrete on the track and brooming it in. From that day forward, Niagara was renowned for its excellent traction.

This  1970 Niagara Drag Strip decal was reproduced from original artwork, taking special care and attention to detail. Unlike our competitors, we strive to make the most accurate representation on the highest quality material possible. Benefit from our attention to detail by ordering one, today! 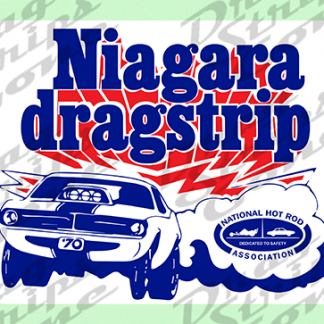