Empire Dragway, previously referred to as New York International Raceway Park and Dragway 36 is a quarter-mile drag strip located in Leicester, New York. It is centrally located between Buffalo, Rochester, and Syracuse. Originally called Empire Dragway, then Dragway 36 (that name was derived from the fact that the track is located just west of New York State Route 36), later called New York International Raceway Park, then in 2008, returning to it’s original name of Empire Dragway. The track first opened in the late ’60s. It hosted what was to become a popular annual event in the ’70s: The Gold Cup…the track boasts the longest shutdown area on the East Coast, at 3,000 feet (910 m). It was owned and operated by Bob and Donna Metcalfe, who bought it in 1986 and had an abbreviated opening season beginning in August of that year. The first full season in 1987 had sanctioning from NHRA (National Hot Rod Association). In anticipation of hosting National Events, a change of sanctioning bodies was made to IHRA International Hot Rod Association in 1989 and held its first IHRA Empire Nationals the following year. Many schedule changes and facility improvements were made under Metcalfe’s ownership. It once ran “test and tune” and bracket racing for trophies on Wednesday nights. Friday night the track was open to everyone for test and tune. Once a month the track held a “MOMS events usually on a Friday night. MOMS stands for Mustang on Mustang Shootout, and has been running pro-tree & heads-up at NYIRP since 1994. Typically fifty to one hundred plus Mustangs regularly show up to each of these events. On Saturdays, the track runs their full bracket points program for a purse. The track’s original name–“Empire Dragway”, was resurrected following the 2008 season. At the end of the 2013 season, Livingston County successful businessman, Jerry Scaccia and wife Clara purchased the facility and intended to operate it on Wednesday, Friday and Saturday nights; The track has seen many improvements since the change in ownership—a new competitor entrance was constructed which made access easier for the racers and other minor changes as well. The Scaccia’s first season began 4/19/2014; the inaugural full season ended 10/25/2014.

Like all our creations, we build from scratch the final design, not just “scan and print” duplication. Outside window application on printed vinyl. 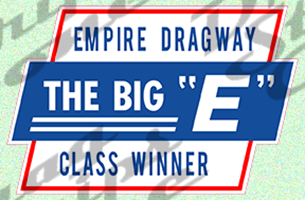